This section briefly describes our rich history dating back to 1940:

Notable events that the choir has been involved with are listed below:

In 1941 Portsmouth was subjected to intense attack from the air. Officers of the Portsmouth City Police together with War Reserve and Special Constabulary colleagues were called upon to add civil defence and emergency duties to their conventional police ones. Many hours were spent on stand-by between air-raid alerts and Sgt F T (Tommy) Holland saw a chance, when the men harmonised, of roping in the best of them to form the nucleus of a choir. It gradually improved to such a standard that the Chief Constable approved the formal establishment of the Portsmouth City Police Choir. Its first conductor was Special Sergeant (later Inspector) James Cracknell.

Very soon the choir was in demand to raise morale and for fund-raising activities in the battered city. Many concerts were given with the Band of HM Royal Marines, then, as now based in the city.

Invitations also followed to broadcast on the Home & Overseas programmes of the BBC. This activity continued after the war and included appearances in 'Friday Night is Music Night'.

After the rationalisation of police forces in 1967 the choir became the Hampshire Police Choir. Its size has remained at about 60 with serving and retired police officers, special constables, civilian staff and others associated with the service.

In recent years the choir has sung with choirs from Duisberg and Kiel, Germany, Oslo, Norway, Le Havre, France as well as the Rhos Cwmtawe Choir from South Wales and the St Colomba choir from Cornwall. The choir has exchanged visits with most of them.

The choir sang in both the British Police Male Voice Choir concerts in the Royal Albert Hall, London in 1987 and 1990, and also with the massed bands of four regiments of the Brigade of Guards, directed by Owain Arwel Hughes, at the Cardiff Arms Park, in Wales in 1992 for the concert of the World Choir.

The choir has a long history of community involvement and has raised tens of thousands of pounds for charitable purposes. This was marked in 1991 by a notable 50th Anniversary Concert with the band of HM Royal Marines before a capacity audience of 2000 in Portsmouth Guildhall.

The choir is non-competitive but in 1993 it was invited to sing in the 5th Malta International Choir Festival with choirs from any European countries. In the male voice section the choir was placed first and received the Gold Award, bearing testimony to its quality.

Hampshire Police Choir has also been privileged to visit the States of Jersey by special invitation, and to have shared platforms with the band of the Scots Guards, the Central Band of the Russian Army (formerly the Red Army Band) and the band of the United Air Forces in Europe and many other local amateur bands like the Solent Concert Band who have won many prizes.

The sustained quality and reputation of the choir was marked by an invitation to join the massed choirs in the National 50th Anniversary of VE Day celebrations in Hyde Park, London, before members of the Royal Family, Heads of State and an audience reported to be about 200,000!

In 1997 the choir made a week long tour of Croatia at the invitation of the government. The choir sang in Zagreb, Pula and Dubrovnik in support of children's charities looking after the many orphaned children following the dreadful civil wars in the region. The choir was overwhelmed with generosity and friendliness of the Croatian people. Despite the war, Croatia is certainly an exceptionally beautiful country with many ancient sights and monuments.

For 21 years the choir was conducted by Trevor Ibbotson, but in 1997 the choir appointed its first female Musical Director, Mrs Terri Freeman LRAM, LTCL, FISM. Since then, under her direction, the choir has continued to grow and now has an expanded repertoire covering many genres including songs from the musicals, classical works and popular music from the past. The choir has sung at exciting new venues such as Romsey Abbey, Winchester Cathedral, Portsmouth Anglican Cathedral together with a special invitation to take part in the BBC 'Songs of Praise' programme for Remembrance Day.

This article is taken from the Spring 2019 edition of News & Views magazine, published by the National Association of Choirs, to which our choir is affiliated.

All choirs come to rely on their musical directors and accompanists to support them in learning music and creating wonderful performances but how many choirs can claim to have had the support and experience of the same musical director and musical accompanists for over twenty years?

Terri Freeman LRAM LTCL FISM joined the Hampshire Police Male Voice Choir in September 1997 as Musical Director and this March will become the longest serving musical director since the choir was formed in 1940. She will be leading a special concert to celebrate this achievement in the same venue as her first concert with the choir, namely All Saints Church Denmead on Saturday 23 March.

The concert will be supported by senior members of Hampshire Constabulary and other members of the community in Hampshire.

Terri will be joined by Nigel Smith our musical accompanist who will have notched up just over 21 years as our accompanist, supporting us in excess of 150 concerts. Sian Bibby–Hsia joined as a second accompanist just over 20 years ago and then added the role of Assistant Musical Director to her portfolio a little later. The three have worked together as a team to ensure that the choir performs to a magnificent standard which is appreciated by all that support the choir and its performances.

The Chief Constable of Hampshire, Olivia Pinkney QPM MA, recognised the long service of all three to the Police Family in recent award ceremonies where the three were accompanied by friends and family. 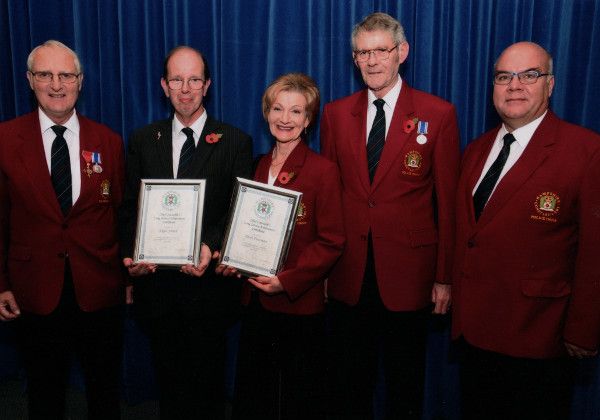